Your Shop: RE/MAX ADVANTAGE PLUS MINNESOTA

Other ways to order:

Use our templates
Upload finished art

Help Center
Set up a new shop
What is a shop?

Andrew Luck, the 4-time Pro Bowl quarterback of the Indianapolis Colts, retired this weekend after seven seasons. It was a shocking move by one of the game’s most enigmatic and respected players. A brainy, self-described nerd who played college football at Stanford, Luck combined the game’s toughness with intelligence both on and off the field. The attention paid to his retirement is yet another indicator of the way that football can capture and dominate the cultural conversation in the US. We wish Andrew Luck all the best in whatever he decides to do next, and look at ten of the most impressive feats  of his NFL career.

10) Andrew Luck recovers fumble for a TD: In January, 2014, in a playoff game against the Kansas City Chiefs, Indianapolis running back Donald Brown was hit and fumbled the ball near the KC goal line. Luck recovered the ball and quickly powered his way into the end zone for a touchdown, part of an amazing comeback victory for the Colts.

8) 55 Yard Pass Vs. Miami Rookie Year: Luck’s 2012 rookie campaign was a highlight reel in itself, and this pass against Miami (starting at 2:40 in this clip) showed just how talented a downfield passer he was. 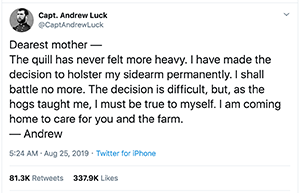 7) His Twitter Feed, @CaptAndrewLuck: Luck is a master Twitter user, creating a persona similar to that of a Civil War era military Captain. He set himself apart by posting messages to his “Dearest Mother,” addressing the strength of his sidearm, his need for squirrel oil, and other hilarious amd oddly inspirational messages. Thr account reflects his nerdy, literary sensibilities, and shows how unique a person Luck was in professional football. Do yourself a favor and spend some quality time reviewing this account.

6) 42 Yard TD Strike On The Run: This play from his rookie year shows Luck remarkable ability to evade defenders and male perfect throws downfield. Check out the defender literally grabbing his heel as he makes this clutch throw at the 1:28 mark of this highlight reel.

5) 2018 AFC Wildcard Game: The Colts came in against the favored Houston Texans and Luck picked the vaunted Houston defense apart, throwing for 251 yards and leading Indianapolis to the divisional playoff round.

4) Change The Play: Another off-field place where Luck excelled, partnering with the Riley Children’s Health in Indianapolis to run camps to encourage children to exercise and improve their eating and nutrition habits. Luck hosted a week long camp each year, engaging with hundreds of kids aged 5-13.  The smiles never stopped, from the campers or Luck.

3) Game winning TD in Playoffs: This 64-yard strike to T.Y. Hilton capped the Colts’ remarkable comeback against Kansas City in the January 2014 playoffs. The play (at 2:44 in this video) gave the COlts their first lead in the game, which they woon 45-44.

2) The Andrew Luck Book Club: Luck is an avid reader, and after a sports writer called him “the NFL’s unofficial librarian,” Luck, at the urging of his mother, made a club official. Each month Luck recommends two books, one for younger readers and one for more experienced readers, and encourages online discussions of the books. He’s interviewed authors, and more importantly, put the importance of reading in the spotlight in the NFL and beyond.

1) 2018 Comeback Player of the Year: Having battled back from multiple injuries, Luck, as it turned out had a career year in his final NFL season, throwing for more than 4,500 yards, 39 TDs, and leading his team to the playoffs. The season was a reminder of his elite status among NFL quarterbacks, and his ability to carry a team to big time victories.

All the best to you in the future, Capt. Andrew Luck!